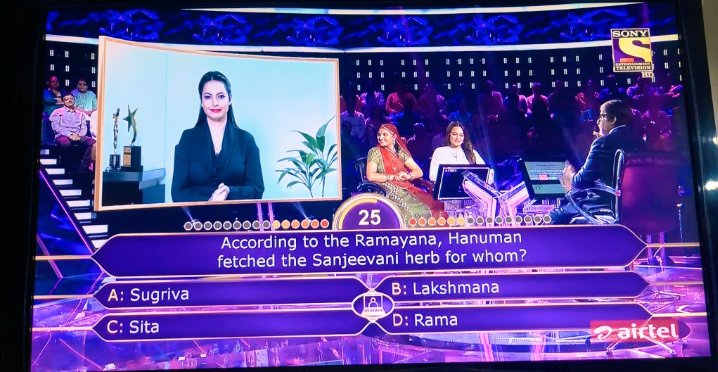 Sonakshi Sinha appeared in a special episode of Kaun Banega Crorepati this week. She accompanied social worker Ruma Devi from Barmer who appeared on the hot seat. But it seems Sonakshi’s decision to appear on the show brought her utter shame. She is being trolled all over social media because of her dumbness.

She was unable to answer a question and used a lifeline to get the right answer. The question was asked for one lakh two thousand. The question was for whom Hanuman fetched sanjeevni herbs. Sonakshi answered Rama while Ruma Devi said, Sita.

The answer given by Sonakshi was wrong. The entire social media is flooded with her memes. Fans are trolling her saying that she is dumber than Alia Bhatt. They also went to the extent of saying that she should be awarded the medal for being so dumb. Even dialogues from her famous movies are being used to troll her.

Amitabh Bachchan was surprised to see that Sonakshi did not know the answer to this question. He mockingly said to Sonakshi that names of her family members are all based on Ramayana. Her father’s name is Shatrugan Sinha, her uncle is Bharat Sinha, Ram Sinha and her brother’s name is Luv Kush. Amitabh Bachchan said that it is really surprising to see that you don’t know the answer to this question even when your household name is Ramayana. Amitabh Bachchan jokingly said to Sonakshi’s mother that she should not let Shatrugan Sinha see this episode of KBC or else he will be very angry. This made the audience laugh.

This actress whose whole family is named after Ramayan dont know an inch about anything about history of ramayan and hypcrisy is that she proudly said dat she plyed role of scntist n "mission mangal" #shamesonakshi #sonakshisinha #KBC11 atlst tht womn is mor edcated N scial thn U pic.twitter.com/yMoDhxkALv

#AliaBhatt #sonakshisinha Crown has been passed to Sonakshi from Aalia pic.twitter.com/zah9ztcO8v

You can find an array of Sonakshi memes on social media now. Some of them are hilarious.

When #sonakshisinha says i don't know, I will choose a lifeline ….

With iOS 13, Apple bolts out applications from getting to clients’ private notes in Contacts