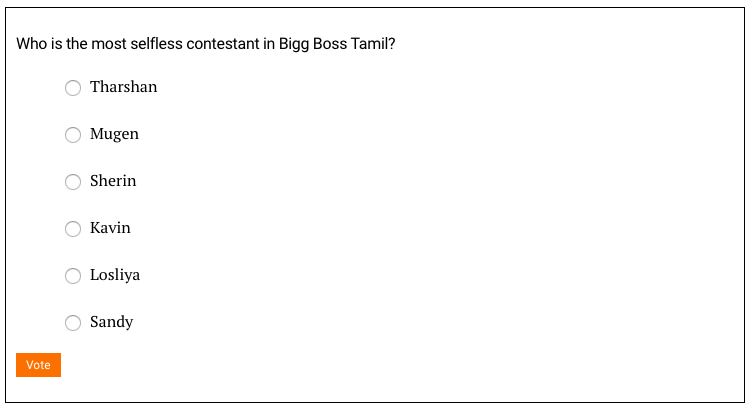 As you all know we are close to the end of Bigg Boss season 3 Tamil Finale, it’s the right time to analyze all the contestant present in the house. We are amazed to see Sharan’s selflessness when he saved Sandy by eating raw green chilies this week. We also witnessed Sandy’s selflessness as he cannot tolerate the fact that Kavin is going against him. He always comes and apologizes when something goes wrong just to prove that he is worthy to be in the finale.

Even Mugen is showed his selflessness when Tharshan got injured during the ‘Ticket to Finale’ challenges. He rushed to help him leaving his challenges which were unexpected of him. He could have easily ignored it but he didn’t. Sherin is also being very supportive of all the contestants who are feeling low. On the other hand, Kavin said to Kamal Hassan that he is willing to leave the house for his friends. Not only that but he even helped Losliya in an argument. Even Losliya have supported Kavin throughout the Bigg Boss show. She even supports Cheran at times. Now it’s time for you guys to decide and vote for the most selfless contestant in the house.

AweEraser: Best Software for Wiping All Data before You Sell Your Old…